Just as it was with literature and fine art, songwriting ostensibly entered a second renaissance during the course of the 20th century. This latest renaissance would appear to take a turn toward the avant-garde and surrealist take on artistry. The change perhaps began with experimental literature in the early 20th century with the likes of James Joyce et al. pushing the boundaries of lingual convention. Later on, Salvador Dalí would be melting his clocks over tree branches, and then just a few decades later, The Beatles would be in the studio experimenting with reversed tape loops to create their famous psychedelic track ‘Tomorrow Never Knows’. The century was opening its eyes to abstract ideas, often with the aid of mind-expanding psychedelic drugs which seemed to fuel this period of social and artistic change, especially from the early 1960s onwards.

With this burgeoning oddity within the world of art, musicians were looking to keep their lyrics unique and compelling so as to keep their heads above the waters of normality which were deepening all the while. It would be during the 1960s that we welcomed some of the greatest songwriters of all time with the likes of Bob Dylan and the Lennon and McCartney partnership making their voices heard. This explosion of artistry in music was naturally a result of the expanding capabilities of music recording for commercial consumption, but the best songwriters from this generation were, more often than not, disciples of the new post-realist literary revolution that would have been getting into its full swing during their childhood years.

Another pivotal change that occurred in the 1950s and ‘60s that would add fuel to the fire of abstract art, was the work of American writer William S. Burroughs. As a leading figure of the so-called ‘Beat Generation’ of bohemian non-conformists, Burroughs was always looking for pioneering methods of producing his literary and visual art. Aside from his seminal catalogue of novels and short stories, Burroughs devised his famed cut-up technique, which was devised as a method to spur the imagination and evoke subconscious ideas.

This surrealist technique, which he developed alongside the artist Brion Gysin, is carried out by cutting words, phrases and snippets of sentences from newspapers, books and one’s own writing. In a “montage technique”, as Burroughs put it, the fragments are spread out randomly and rearranged into abstract sentences. The method was primarily used for writing cues but he later introduced the concept to audio recording and film production which made for inspiring changes for avant-garde media.

This method would revolutionise art in most forms over the course of the late 20th century, most significantly in music. While many of us may not be familiar with Burroughs’ method, we all will have been witness to the blossoming impacts it had on some of our favourite artists. The method is still used today, but one of the earliest examples of Burroughs’ influence on pop music was when The Beatles included his face in the collage that featured as the album artwork for Sgt. Peppers Lonely Hearts Club Band. He had been a clear inspiration for the Fab Four and their advocacy for the literary marvel seemed to spread from there. Just a few years later, Mick Jagger would be on tax exile in the South of France with the Rolling Stones. When desperately looking for inspiration for some tracks to finish off their eponymous album Exile on Main Street, Jagger purportedly employed the cut-up method to produce some of the lyrics.

Around this time too, David Bowie was known to occasionally draw inspiration for some of his lyrics using the cut-up technique and he explained how he would approach it in a 2008 interview: “You write down a paragraph or two describing different subjects, creating a kind of ‘story ingredients’ list, I suppose, and then cut the sentences into four or five-word sections, mix ‘em up and reconnect them”.

Nirvana’s Kurt Cobain was also another disciple of the technique. Once, the music critic Jim Derogatis quoted Cobain as saying: “My lyrics are total cut-up. I take lines from different poems that I’ve written. I build on a theme if I can, but sometimes I can’t even come up with an idea of what the song is about”.

As a more recent example, Radiohead’s Thom Yorke is said to have used the method for their abstract and experimental turn of the millennium masterpiece Kid A. These artists aforementioned are merely the very tip of the iceberg as famous examples of where Burroughs’ influence has rippled through our most cherished music over the past 60 years.

Below is a video of the starman himself explaining the inspirational wonder of the method. 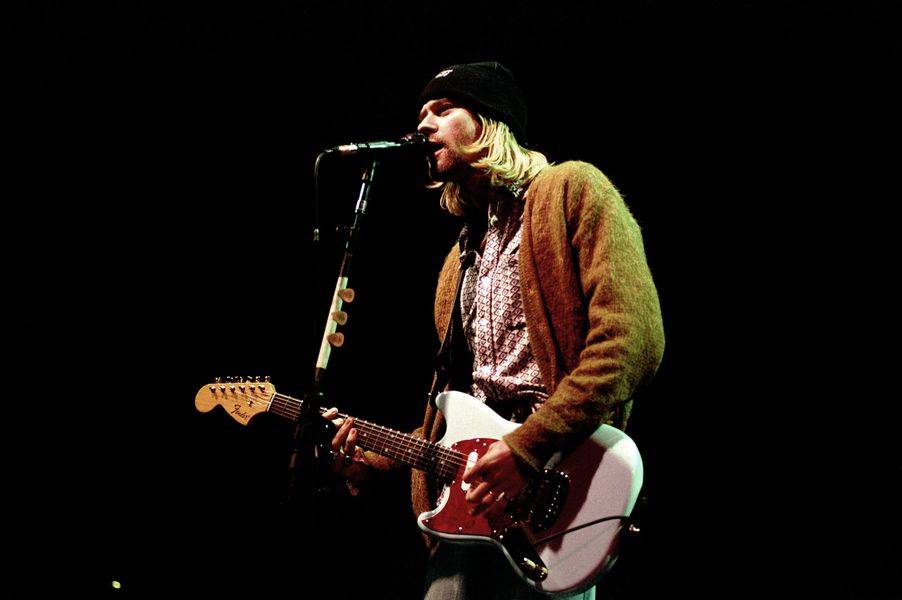 Six of Kurt Cobain’s favorite guitarists of all time